√ Be ready for Stage

Unique products for belly dance at good prices, the policy loyal to customers and individual selection of product according to your desire.

The Ghawazi (also ghawazee) dancers of Egypt were a group of female traveling dancers of the Dom people (also known as Nawar).

The ghawazi style gave rise to the Egyptian raqs sharqi by the first half of the 20th century.

While the performative raqs sharqi in urban Egypt was heavily influenced by Western styles such as classical ballet or Latin American dance, the term ghawazi in Egypt refers to the dancers in rural Egypt who have preserved the traditional 18th- to 19th-century style. 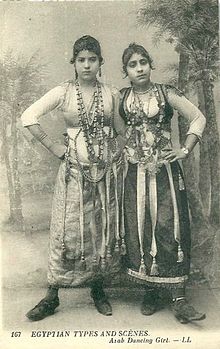 The term "ghawazi" is inherited from the Northern Indian term "Gowaar" meaning singer. The term "Gaon" is equal to the verb "sing" and the term "Gana" means song. This explains the inheritance of Nawari or Dom people from the group of performing artists known as "Bazigar" in Punjab.[2]

An almeh in origin was a courtesan in Arab tradition, a woman educated to sing and recite classical poetry and to discourse. After the ghawazi were banned, they were forced to pretend that they were in fact awalim. The term almeh was introduced in French Orientalism as almée and used synonymously with "belly dancer".[3]

In 1834, the ghawazi were banished from Cairo to Upper Egypt by Muhammad Ali. Typically, the Ghawazi are represented as Dom or Gypsies, with a particular attention to their music and dance styles, featuring mizmars and heavy bass lines.[4]

Beginning in the first half of the 19th century, descriptions and depictions of ghawazi dancers became famous in European Orientalism, and the style was described as danse de ventre or belly-dance from the 1860s.

The Ghawazi performed unveiled in the streets. Rapid hip movement and use of brass finger cymbals/hand castanets characterized their dance. Musicians of their tribe usually accompanied them in their dance. They usually wore kohl around their eyes and henna on their fingers, palms, toes and feet. According to Lane these women were "the most abandoned of the courtesans of Egypt".[5] He describes them as being very beautiful and richly dressed.

The Ghawazi performed in the court of a house, or in the street, before the door, on certain occasions of festivity in the harem. They were never admitted into a respectable harem, but were frequently hired to entertain a party of men in the house of some rake. Both women and men enjoyed their entertainment. However, many people who were more religious, or of the higher classes, disapproved of them.[5]

Many people liked the dancing of the Ghawazi, but felt it was improper because of its being danced by women who should not expose themselves in this manner. Because of this, there was a small number of young male performers called Khawals. The Khawals were Egyptians who impersonated the women of the Ghawazi and their dance. They were known to impersonate every aspect of the women including their dance and use of castanets.[5]

Rotogravure of another depiction of a ghaziya by Gérôme

Representing diverse historical backgrounds, most of the Ghawazi of the Qena region belong to ethnic minorities such as the Nawar (or Nawara), Halab and Bahlawen.

Particularly well known are the Banat Maazin family, Nawar people that settled in Luxor and were filmed in the 70s and 80s. Many consider the Maazin family to be the only practicing family left of the original line of Ghawazi dancers.

The style of dance and costuming of the Ghawazi has been especially influential in crafting the look of American Tribal Style Belly Dance. Traditional Ghawazi dress consists of an Ottoman coat with slits, known as a Yelek or entari. The abdomen is covered by these coats. Turkish harem pants are worn under these coats. The coats are typically ankle-length, though some modern Ghawazee troupes wear a shorter version over a full, knee-length skirt. Ghawazee dancers often adorn their heads with elaborate headresses, with dancers often accompanying themselves by playing zils, or small cymbals that are used by dancers in many forms of Middle Eastern dance.

bellydance products sell around the world. Shop based in Ukraine and Egypt

This email address is being protected from spambots. You need JavaScript enabled to view it.